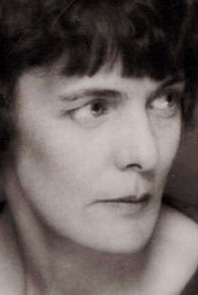 H.D (1886-1961) was born Hilda Doolittle in Bethlehem, Pennsylvania. She spent most of her life in Europe, but in her youth before her move to London in 1911 she made important connections with fellow writers William Carlos Williams, Marianne Moore, and Ezra Pound, to whom she was engaged off-and-on. Her unconventional relationship with Pound, perhaps better described as a ménage-a-trois, was the first of many relationships that defied normative pressures from both within and without her circle. After a marriage and various affairs, she entered into a lifelong polyamourous partnership with Bryher, writer and heir to a British shipping fortune. Her alternative lifestyle and economic independence provided a position from which she was free to pursue experimental poetry, fiction, film, and translation for five decades. Her social contacts extended from artists and writers to actors, psychoanalysts, and war heroes. On her path to artistic maturity, H.D. developed a voice that was sharp enough to retain its early imagistic punch yet flowing enough to explore the limits of esoteric speculation and aesthetics in several long poems. Her prose output was equally impressive, including two novel cycles and a number of important memoirs and essays. H.D. by the end of her career wrote in her own masterly version of Eliot’s “mythical mode,” broadened by her lifelong interest in the occult and sharpened by indignant incredulity at culturally-received prescriptive roles for women in the personal, artistic, moral, and religious spheres.

Until fairly recently H.D. was more-or-less exclusively associated with the influential but short-lived Imagist movement: an oft-retold story has Ezra Pound simultaneously “inventing” Imagism and H.D. in one stroke at a meeting in the British Museum Tea Room. The terse, “crystalline” poetry that first made her name was merely a stepping-stone to longer and denser work, and it coexisted with other projects: in the same decade that she was writing the poems in Sea Garden she was also writing the novel HERmione, translating Euripides, and formulating the dense hybrid philosophy of aesthetics, poetics, and esoterica recorded in Notes on Thought and Vision. Following a critical revival of her work by a group of feminist critics in the 1980s, H.D. has re-emerged as a major figure of modernism, with over a dozen previously-unpublished works coming to light. A reader of Kenner’s The Pound Era when it was published in 1971, if she were to notice H.D.’s name at all, would not have had access to HERmione, Hermetic Definition, Sagesse, Vale Ave, End to Torment, The Gift, The Sword Went Out to Sea, Majic Ring, White Rose and the Red, The Mystery, Compassionate Friendship, Magic Mirror, and other important poems, stories, memoirs, and notebooks. Several of these works have only come to light within the past decade, and so H.D. scholarship is a living, growing body of work.