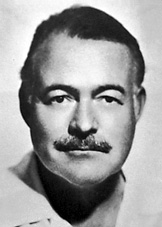 Ernest Hemingway, the son of a doctor, was was born in Oak Park, Illinois, on 21st July, After being educated at the local high school, Hemingway became a reporter for the Kansas City Star.

When the United States entered the First World War Hemingway tried to enlist, but was rejected because of a defective eye. He instead joined the Red Cross as an ambulance driver. Hemingway was sent to Europe and was badly wounded on the Austro-Italian front. He was hospitalized in Milan. After the war Hemingway worked as a journalist in Chicago before becoming a foreign correspondent for the Toronto Star. While in Europe he associated with a group of radical American journalists that included Max Eastman, Lincoln Steffens and George Seldes. Eastman, the former editor of the The Masses helped Hemingway get his work published in The Liberator and the New Masses. The American author Gertrude Stein, who was based in Paris, also promoted Hemingway's work.

Hemingway's first collection of stories, In Our Time, was published in 1925. His novel The Torrents of Spring appeared the following year. However, it was his next book, The Sun Also Rises (1926), a novel about the aftermath of the First World War, that brought him to the attention of the literary critics. The journalist John Gunther met Hemingway in 1926 at the home of Ford Madox Ford. Gunther told his friend, Helen Hahn: "Put that name down. Ernest Hemingway. He can think straight and he can write English. Heaven knows two such joined accomplishments are rare nowadays."

Other books published during this period was a collection of short stories, Men Without Women (1927) and a A Farewell to Arms (1929), a novel based on his love affair with Agnes von Kurowsky and his experiences of working with the Red Cross. He also wrote a study of bullfighting, Death in the Afternoon (1932), a collection of short-stories, Winner Take Nothing (1933) and an account of big-game hunting, The Green Hills of Africa (1935).

Hemingway reported on the Spanish Civil War, where he advocated international support for the Popular Front Government. In February 1937 Hemingway went to Spain and reported on the war in the Madrid area. He spent most of his time with the International Brigades. Hemingway also helped the Dutch film director Joris Ivens make The Spanish Earth.

Hemingway spent a lot of time with Herbert Matthews in Spain. Alvah Bessie met them at Ebro: "One was tall, thin, dressed in brown corduroy, wearing horn-shelled glasses. He had a long, ascetic face, firm lips, a gloomy look about him. The other was taller, heavy, red-faced, one of the largest men you will ever see; he wore steel-rimmed glasses and a bushy mustache. These were Herbert Matthews of The New York Times and Ernest Hemingway, and they were just as relieved to see us as we were to see them."

Hemingway returned briefly to the United States where he met President Franklin D. Roosevelt to discuss the war. He also made speeches in an attempt to raise money for the Republican Army. In March 1938 Hemingway returned to Spain and toured the areas still under the control of the Popular Front Government. He also wrote the play The Fifth Column, which promoted the Republican cause.

After the war Hemingway wrote the novel For Whom the Bell Tolls (1940). The book, which deals with the Republican partisans in the Sierra de Guadarrama, sold over 270,000 copies in its first year. A former member of the Abraham Lincoln Battalion, the writer Alvah Bessie, later complained about the book: "His (Hemingway) dedication to the cause of the Spanish Republic was never questioned, even though the VALB men attacked his novel, For Whom the Bell Tolls, as a piece of romantic nonsense when it was not slanderous of many Spanish leaders we all revered, and scarcely representative of what the war was all about."

Hemingway, who married Martha Gellhorn in 1940, worked as a war correspondent during the Second World War. After the war Hemingway moved to Cuba where he wrote The Old Man and the Sea (1952), a novel that won the Pulitzer Prize. Two years later Hemingway won the Nobel Prize for literature.

A Moveable Feast, a memoir of his years in Paris after the First World War, and two novels, Islands in the Stream and The Garden of Eden, were published after his death.