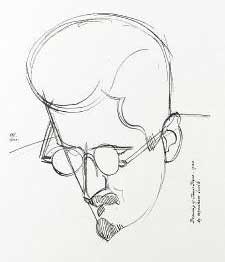 James Joyce was an Irish playwright, poet and novelist noted for his experimental use of language in such works as Ulysses (1922) and Finnegans Wake (1939). During his career Joyce endured rejections by publishers, suppression by censors, attacks by critics, and misunderstanding by readers. Joyce's technical innovations in the art of the novel include the extensive use of interior monologue and stream of consciousness; a complex network of symbolic parallels drawn from mythology, history, and literature; and a unique language of invented words, puns, and allusions. From 1902 on Joyce led a nomadic life, which is perhaps reflected in his interest in the character of Odysseus. Although he spent long times in Paris, Trieste, Rome, and Zurich, with only occasional brief visit to Ireland, his native country remained central to all of his work.

Joyce was born in Dublin as the son of John Stanislaus Joyce, an impoverished gentlema who had failed in the distillery business and tried all kinds of professions, including politics and tax collecting. Joyce's mother, Mary Jane Murray, was ten years younger than her husband. She was an accomplished pianist whose life was dominated by the Roman Catholic Church, and by her husband. In spite of their poverty, the family struggled to maintain solid middle-class façade.

From the age of six Joyce was educated by Jesuits at Clongowes Wood College, at Clane, and then at Belvedere College in Dublin (1893-97). Later, he thanked the Jesuits for teaching him to think straight, although he rejected their religious instruction. At school he once broke his glasses and was unable to do his lessons. This episode was recounted in A Portrait of the Artist as a Young Man (1916). In 1898 he entered the University College, Dublin, where he found inspiration in the works of Henrik Ibsen, St.Thomas Aquinas, and W.B. Yeats.

After graduation in 1902, the twenty-year-old Joyce went to Paris where he worked as a journalist and teacher. He was regularly in difficult financial straits. He spent a year in France, returning to Ireland when he learned that his mother was dying. Not long after her death, Joyce was traveling again. He left Dublin in 1904 with Nora Barnacle, a chambermaid whom he married in 1931, and travelled across Europe, eventually settling in Trieste.

The Trieste years were chaotic, poverty-stricken, and productive. Joyce wrote most of Dubliners (1914), all of A Portrait of the Artist as a Young Man, the play Exiles (1918), and large sections of Ulysses.

Joyce started to develop the early chapters of Ulysses, which was first published in France because of censorship troubles in the Great Britain and the United States. The main characters are Leopold Bloom, a Jewish advertising canvasser, his wife Molly, and Stephen Dedalus, the hero from Joyce's earlier novel Portrait of the Artist as a Young Man. They are intended to be modern counterparts of Telemachus, Ulysses, and Penelope. The story, which makes heavy use of stream-of-consciousness, parallels the major events in Odysseus' journey home.

In March 1923, Joyce started his second major work, Finnegans Wake. The first segment of the novel appeared in Ford Madox Ford's Transatlantic Review in April 1924, as part of what Joyce called Work in Progress. The work on Finnegans Wake occupied Joyce's time for the next sixteen years. The final version of the book was completed late in 1938.

After the fall of France in WW II, Joyce returned to Zurich, where he died on January 13, 1941, still disappointed with the reception of Finnegans Wake.