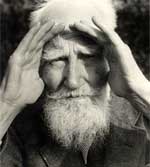 George Bernard Shaw was born on July 26, 1856 in Dublin, Ireland. His father was a corn miller. There was not much money to spend on George's education and he attended local schools but not university.

In 1876, he moved to London with aspirations to become a writer. During the first two years after coming to London, he studied on his own a great deal at the British Museum. Bernard Shaw started out in his writing career by writing music and drama criticism and novels. At first he was more successful as a journalist. He wrote for "Pall Mall Gazette". George Shaw would later join the Fabian Society and the Socialist League. He began to give lectures on socialism on street corners. He wrote a series of pamphlets—"Fabian Manifest"," The True Radical Programme", "Fabian Election Manifesto"," The Impossibilities of Anarchism", "Fabianism and the Empire" and "Socialism for Millionaires". Shaw's pamphlets supported equality of income.

In the early 1900's, George Shaw also wrote several plays. These plays included political themes and issues concerning poverty and women's rights. The plays implied socialism could help to solve these and other problems. He wrote "Man and Superman" (1902), "John Bull's Other Island" (1904) and "Major Barbara" (1905). In 1914 he wrote "Saint John", which was considered to be one of his masterpieces.

Over the years many more plays followed including: "Heartbreak House", "Back to Methuselah", "The Apple Cart" and "Too True to be Good". He won a Nobel Prize for literature in 1925. Shaw wrote over 50 plays during his literary career. Throughout his life George Bernard Shaw wrote about social and political issues. Right up until the time of his death on November 2, 1950, Shaw remained committed to the socialist cause.