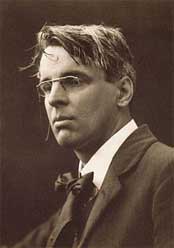 William Butler Yeats was born in Sandymount, County Dublin in 1865. His father was a well-known portrait painter; subsequently, many of the Yeats' children pursued careers in the arts. At the age of nineteen, Yeats enrolled in the Metropolitan School of Art in Dublin where he was able to publish some of his poetry in the Dublin University Review. During his twenties the family moved to London, where Yeats met many other artists and writers, including George Bernard Shaw and Oscar Wilde. In 1889 he published his first volume of poetry, The Wanderings of Oisin and Other Poems, which was swiftly followed by more publications of poetry and non-fiction, including several anthologies of Irish folk tales.

Yeats developed an interest in mysticism and visionary traditions as well as in Irish folklore, and both interests would continue to be sources of poetic imagery. In 1889 he fell in love with Maud Gonne, a brilliant, beautiful Irish patriot who inspired his involvement in Irish nationalism, but who did not reciprocate his feelings. With Lady Augusta Gregory and others, he founded the theatre that became the Abbey Theatre; throughout his life he would remain one of its directors. He contributed plays to its repertoire, including The Countess Cathleen (1899), On Baile's Strand (1905), and Deirdre (1907). His poetry changed decisively in the years 1909-14: his work gained in concreteness and complexity, often dealing with political themes, though his interest in mysticism and his passion for Maud Gonne continued. With Responsibilities (1914) and The Wild Swans at Coole (1917), he began the period of his highest achievement. Some of his greatest verse appears in The Tower (1928), The Winding Stair (1929), and Last Poems (1939). The individual poems of the latter are largely held together by the system of symbolism he developed in A Vision (1925), which used astrological images to link individual psychology with the larger patterns of history. Yeats was also a member of the Irish Senate (1922-28).